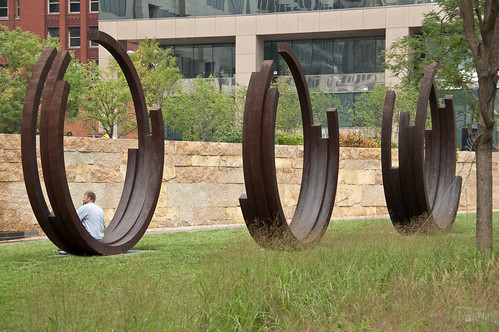 Citygarden is a new park with a twist in St.Louis, unlike other parks it’s not just a green and lush landscape, it  incorporates art with the landscape.  A landscape that features fountains and pools, a waterfall, places to sit and a café.

A garden for residents and city workers to relax during the day, take a evening stroll or have a weekend coffee with the morning newpapers.

The garden occupies the two blocks between Eighth and Tenth and Chestnut and Market Streets. The two blocks, which are owned by the City and cover 2.9 acres, are part of the Gateway Mall, a 19-square block spine of green space that stretches mostly uninterrupted for a little more than a mile from Broadway to 21st Street. The space is framed to the east by St. Louis’s world-renowned Gateway Arch and its historic Old Courthouse.

The City of St. Louis and Gateway Foundation announced in June, 2007 that they would partner in creating the garden. The City owns the garden improvements and will continue to own the land. Its only expenses will be for water and electricity. The not-for-profit Gateway Foundation is providing the funding — an estimated $25-$30 million, covering design and construction and front-end “soft costs” such as financing, anticipated expenses for security and insurance, etc. The cost of the sculpture, which is and will remain owned by the foundation, is separate. Going forward, Gateway Foundation will pay for all costs of Citygarden except water and electricity.

Also watch the great video at St.Louis Today with Warren Byrd who speaks about the project and the role of  Nelson Byrd Woltz in the project.